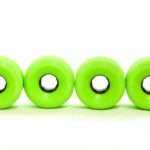 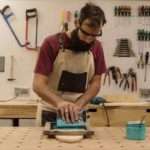 Skateboard Grip Tapes: From Sheets To Your Decks

There’s nothing more satisfying than feeling the tingling sensation of touch grip tape against the tips of your fingers. Keeping it rough and fully-tractioned is important for the rider’s safety and controllability.

A skateboard grip tape is applied on top of the deck to create strong traction between the rider’s shoes and the deck. It has a sandpaper-like texture typically made from silicon carbide and aluminum oxide. Without this friction, it’d be impossible to get your deck into the air.

Today, we will be finding out how a grip tape became one of the most important features of a skateboard and how they are made in today’s modern standards.

The Evolution of a Grip Tape

During the booming birth of surfers in the 1960s, sidewalk surfers typically rode skateboards barefoot. Due to the dangers of speeding downhill while having unprotected feet, Slip Check, spray-adhesive, was used and applied on the skateboard in order to wear shoes while having traction from the deck.

The booming popularity of skateboarding gave rise to the innovations of improved detraction. Typically, a resin is poured on the deck, and then sand is sprinkled on the still-wet resin to create a rough surface, thus, the earliest grip tape was invented. Although better than riding barefoot or with spray-on adhesives, the sandy resin texture is not quite grippy enough.

Several years later, the grip tape evolved into a product itself. The first form of grip tape was called Pizza Tape. The name came from how it looks, rough and rocky that looks like pizza toppings.

The pizza tape was a drag to work on, figuratively and literally. The surface was too rough to the point of destroying the soles of the skate shoes. On the other hand, if the grit was too small, the grip will not be enough for proper traction.

Another issue to deal with during the first years of grip tape is how to consistently keep it stuck to the board. In the early 1990s. California laws prohibited the use of solvent-based thinner and lacquers, which is the typical component of adhesives back then.

The early grip tapes had a paper lining, and if water seeped through, it would rot. To prevent this, a barrier needs to be applied in between the wooden deck and the grip tape. The first barriers were made of foil sheets, but with the introduction of plastics, grip tape manufacturers found a barrier that was waterproof, cheaper, and more flexible.

During the 1980s, colored grip tapes became popular as a way to show the personality and the persona of a skateboarder. Boards are typically adjourned with bright sheets of neon-colored tapes that made skateboards aesthetically pleasing as well.

During the mid-90s, graphic grip tape was introduced, offering a plethora of designs including logos and art patterns.

After a decade of trials and experimentations, skaters and manufacturers have found a grip tape they are pleased with. And thanks to better adhesives, better plastics, and finer grits, the functional aspects of grip tape have stayed the same for the past ten years.

How Is a Grip Tape Made?

The inception of the grip tape has made it possible to perform tricks on the air as well as to protect your shoes from the dreaded tear and wear. Now, let’s take a glimpse of how it is made from start to finish.

A large sheet of screen-like polyester is laid onto a converter belt. This polyester sheet will become the base of the grip tape. The screen-like construction allows the grip tape to be flexible and shapeable, making it easy to stick on top of the deck.

Small holes are drilled on the sheet to allow any water, moisture, and air bubbles to run off when smoothening. A machine applies adhesive on the top side of the polyester to create a sticky surface for the silicon carbide.

Silicone carbide mineral composition is sprayed on top of the sticky surface to create a sandpaper-like texture. With the help of a high-powered heat lamp, the silicon carbide dries on top of the polyester film faster.

A machine applies a resin adhesive at the bottom of the polyester film that will result in the sticky underside of the grip tape.

A thick lining of paper is applied over the resin adhesive so that the sticky underside of the grip tape will not come into contact with other materials until the time of application.

An automated lathe cuts the massive layers of polyester film sheets with the silicon carbide top and the adhesive resin bottom into 32-inch by 9-inch strips.

Once the grip tape has been cut, it will then proceed where the decks are and be applied to form a gritty skateboard deck. It is stuck together using an automated machine to avoid misalignment and air bubbles.

A skateboard is not complete without a grip tape. Finding out what it is made of will eventually give you more knowledge about how it helps skateboarders do tricks, how to fix it and how we can guarantee you that our grip tapes are made to last long.

No Comments on Skateboard Grip Tapes: From Sheets To Your Decks/
Share :